The picture below, reproduced here with the kind permission of its owner The Malibu Artist, is one of the rarest photographs ever taken of life below the Oceans. It features the Whale Shark and the Great White Shark together in one glorious cinematic frame. All this happened off the shore of Guadalupe Island which is a haven for whales and sharks. Take ten minutes off from your busy day to watch this truly absorbing, inspirational and unique happening in the video below. 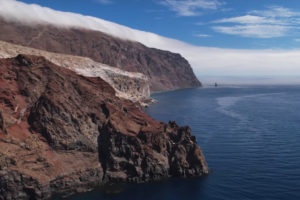 Guadalupe Island or Isla Guadalupe is a volcanic island located 241 kilometres (150 mi) off the west coast of Mexico’s Baja California Peninsula and about 400 kilometres (250 mi) southwest of the city of Ensenada in the state of Baja California, in the Pacific Ocean. The various volcanoes are extinct or dormant.

In 2005 Guadalupe Island and its surrounding waters and islets were declared a biosphere reserve to restore its vegetation (decimated by goats) and to protect its population of marine mammals and birds.

The island is a popular destination for white shark cage diving. Guadalupe Island is inhabited only by scientists, military personnel operating a weather station, and a small group of seasonal fishermen.

The island is mostly arid and has very little surface water.

In Part One of my cage diving experience, I take a trip to Isla Guadalupe, otherwise known as Guadalupe Island in pursuit of a photo I’ve always dreamed of taking. This island is likely the best place in the world to view great white sharks. However, in my time there, it was the other species that intrigued me during the first 24 hours of arrival to this magical place. Not only did I see white sharks and a whale shark together, I also found one of the rarest whales on the planet. I share the footage here, and for the first time, I take my camera underwater to gain a new perspective on great white sharks. Very special thanks to Bridget Nugent for capturing the underwater whale shark footage while I flew the drone above and to David Fox for capturing the incredible underwater whale shark and great white shark footage.