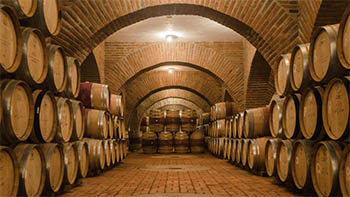 “More Cabernet and less Internet” reads a blackboard above the wine bar of Origen restaurant. “I wrote that down,” the barman smiled, while polishing a few glasses. It’s a philosophy that runs through the Guadalupe Valley, a place where it’s easy to ‘disconnect’ and focus on the finer things in life, including some of the best food and wine in Mexico.

It’s not only excellent Cabernet Sauvignon that’s produced here in Mexico’s most respected wine area, up in the north of the Baja California peninsula. There’s also top-quality Nebbiolo, Sauvignon Blanc, Shiraz and plenty more, all around a 90-minute drive from the US border. With a Mediterranean climate and the quality of seafood off the Pacific coast, alongside the region’s reputation for wine, the Guadalupe Valley now also has some of the best restaurants in Mexico, many of them young chefs looking to make bold statements to the world. 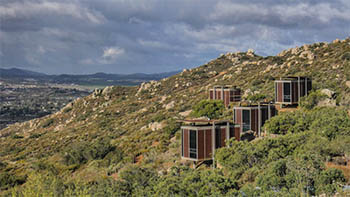 After landing in Tijuana and a quick detour to try the famous and original recipe Ceasar salad at Caesar’s, invented here by Italian immigrant Caesar Cardini in1924, we drive south to the Guadalupe Valley, where we’re welcomed to Encuentro Guadalupe, our hotel, with a glass of a local Cabernet and Merlot blend.

Encuentro Guadalupe is one of Guadalupe’s bold statements, a sleek complex of ‘lofts’ set on the side of a hill, looking out over the valley, with vines as far as the eye can see and peaks dotted with white limestone turning orange as the sun started to set. 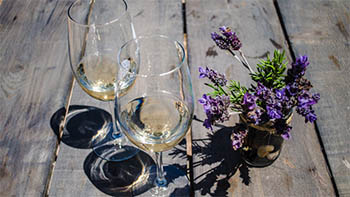 After dark, we make our way to the hotel’s restaurant for dinner, a carefully-presented seven-course tasting menu from the young creative mind of chef Omar Valenzuela. Each dish is paired with one of local winery Henri Lurton’s wines, from a fresh salad with lemongrass vinegar served with a delicate Chenin Blanc to a striped bass with smoked clams served with Syrah. “It was wine that the Guadalupe Valley was known for first, then gastronomy,” Valenzuela says after dinner. “Now both industries buzz off each other, raising the game, making the valley such an exciting destination.”

Wine production in Guadalupe started in thof Bordeaux-trained Mexican winemaker Hugo D’Acosta, who opened his first winery in 1997. “Mexico was the first country in the Americas producing wine, but that culture never stayed with us as Mexicans,” Monte Xanic’s owner Hans Backhoff, son of the founder, explains, on a visit to the winery. “Breaking people’s perceptions of Mexico, as not being a wine country, has been a real challenge.”

Next morning, we make our way across the valley to Agua de Vid, a modern restaurant decorated with recycled materials and serving an Asian-inspired menu. Here, we meet Agua de Vid’s Enrique Hermann and take a drive in the restaurant’s bright red Yamaha Viking, a ‘Racer’ or buggy, speeding along sandy tracks and uphill to stop and appreciate the view.

We stop at Decantos to sample their pure-grape wines, including a very decent 100 per cent Dolcetto. “You can grow grapes

from all over the world here,” Alejandro Granados from the Decantos family tells us, as we enjoy an Asian-style fried octopus and taking in the

vineyards from the terrace. “In other places, you wouldn’t be allowed to experiment like this.”

Later, we visit Bruma, which has an impressive wine cellar made with reclaimed wood from a basketball court, the winery designed by architect Alejandro D’Acosta. Surrounded by wine barrels, we sample Ocho, Bruma’s blend of Cabernet Sauvignon, Tempranillo and Merlot, wh

ile walking around an old dead oak tree at the heart of the tasting room whose branches poke up through the ceiling. We close our day with dinner next door at Fauna, a restaurant from former Noma chef David Castro Hussong, which has an ‘experimental’ philosophy, including no menus, and that utilises fresh Baja produce, including clams.

There are plenty of outstanding places to eat throughout the valley. We stop one day for lunch at Peninsula en el Valle, an open-air restaurant with fine-dining quality, set next to a vineyard and an old wine factory that’s being adapted into an art gallery.

We start with a yellowtail green ceviche with serrano chilli and olive oil, renowned as one of 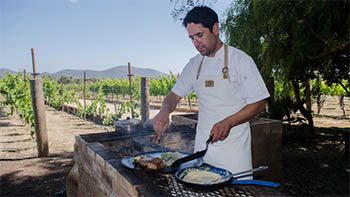 the best ceviches in Baja. “We have the best of almost everything here: fish, wine and olive oil, and it´s Mexico, so we have chillies,” Chef Daniel Benítez explains. “We make a mix of Mediterranean and Mexican dishes and traditions.”

He grills a `Pismo clam´ a white clam with cheese and pineapple-chipotle sauce made on a charcoal grid. To sample our menu, we are poured wine from Bajalupano, a small producer located next door. “We are a very young state, only 120 years old, and the fact that we are in the most important border of Mexico, contributes to an interesting development due to the cultural exchange” says Yolanda Martinez as we try their medal-winning Malbec. “It’s not a competition, its a way of working together to see how much else can we offer as a region.”

Next morning, we take a bike ride through the vineyards of El Cielo winery, passing vines of Syrah, Merlot and Chardonnay. We sample their wines, which are named after astronomers, stars and constellations. The twinkler here is a 100 per cent Nebiollo that our host Alberto Mendez shares with us straight from the container, which won’t be on sale for a year or so. Nebiollo will possibly become Guadalupe and Mexico’s ‘signature wine’. “Nebbiolo is the grape that put Guadalupe in the spotlight,” Mendez explains. “It´s not for the country to say which is their signature wine. It’s a title that other people around the world will decide and which we will take humbly.”

Talking about Nebiollo isn’t possible without talking about a pioneer of Baja’s wine revolution and the development of the grape: the 78-year-old, light-hearted, Camillo Magoni. After working for the Mexican brand L.A. Cetto, Magoni started his own winery, Casa Magoni, at the experienced age of 73. “I was only 14 years old when I started to work on the land, learning everything about the grape,” he tells us over wine and cheese at Casa Magoni. “Then I had a brilliant idea: to go somewhere. And I came to Mexico.”

Magoni was recently named Baja California’s Citizen of the Year and he’s still helping to drive the wine industry forward. “Since I am fully retired now and have nothing else to do, I experiment with grape varieties from six different countries,” he says playfully. “I am learning which variety adapts better to this climate and soil. The idea is to share my experiments with the community. It’s about passing the baton on to the next generation.”

As we sit at a table surrounded by olive trees, we taste Casa Magoni’s Nebbiolo. It’s the finest wine we drink in the valley, with floral, fruity notes and firm, round tannins. “We need to have a space on the world’s supermarket racks that says ‘Mexico’,” Magoni suggests. “We have our own taste. Our Cabernet is not like the Chilean, neither like Napa’s. We have to work on our wine, our image and our traditions.”

Next day, we’re introduced to six angels at Adobe Guadalupe, a luxury inn and winery owned by a Dutch woman called Tru Miller. In a tasting room we try Gabriel (a blend of Cabernet Sauvignon, Merlot and Malbec), as well as. Rafael and Serafiel. “When I came here 22 years ago, there was almost nothing here,” Miller tells us later, as we sit outside her high end food truck, sharing garlic shrimp and salads, as Azteca horses from the stables pass by. “ I came to Baja for the horses and my husband came for the wine. The growth here has been incredible.”

There are now more than 150 wineries in the region. Adobe Guadalupe is one of four wine producers in the valley that was recently selected by French wine expert Michel Rolland to work with and help raise the wine quality even further. Miller also makes a statement in the region by empowering women across her businesses. “This place is for women. Around 50 per cent of people working in the vineyards are women, and 70 per cent of chefs and other staff are women. I just believe we’re equal.”

Later in our trip, we journey through the quiet countryside to Corazon de Tierra, a restaurant founded by Phil and Eileen Gregory, which has colorful chairs and large glass walls facing a garden filled with sunflowers and organic produce.

As the evening sun’s rays shine on the flowers and create a mellow atmosphere, we enjoy plates of clams and oysters paired with a Baja Pilsner beer from Wendlant brewery. Several dishes are creative takes on traditional ingredients, such as a blue corn consommé or a red mole, which is paired with Rosé from Casta de Vina. With clams, seafood, grains, moles, beer and wine, the menu is designed to tell the “story of the Ensenada region”, a waiter explains. The story of the Guadalupe Valley, meanwhile, is still being written. It will be fascinating to return and see the next chapter.

Reproduced from an article by  Andrea Moreno is a travel writer and photographer. Follow her on Instagram @tripsandcolors