Putting Down Roots in Cabo - Welcome To Baja Alive

Putting Down Roots in Cabo

More than simply a place to visit, the residential boom in Los Cabos is on.

The evolution of Los Cabos from sleepy fishing village to party town to global luxury destination is remarkable. It’s hard to deny that this idyllic spot at the tip of the Baja California Peninsula has been a magnet for tourists, fun seekers, golfers and fishermen since the early 1980s. But now, more people are buying residences in Los Cabos than ever before.

The trend didn’t happen overnight, as the Cabo timeshare explosion began almost immediately after Fonatur, Mexico’s national trust for the promotion of tourism, rolled out the red carpet to the world with a new airport in 1984. Many hotels shot up, welcoming eager tourists, and most of them offered timeshares. Still, to this day, visitors arriving at the modern international terminal have to run the gauntlet of timeshare hawkers before exiting the airport. The difference now, however, is Los Cabos is attracting high-end second-home buyers. In the last few years alone, the rapid growth of luxury developments and luxury hospitality brands getting in on the action is stunning.

Some of the reasons for this are obvious. With near perfect weather, a wealth of fine dining, world-class golf and fishing, and an increased number of direct flights from here in Orange County as well as places like Los Angeles, Chicago, Denver and New York City, Cabo has become a more accessible luxury destination with more options for ownership than places like Hawaii and the Caribbean. This quest for quality of life combined with the “luxurification” of Cabo over the last few years has led to this new wave of second-home buyers that are coming en masse.

With luxury brands such as Auberge, The Ritz Carlton, Four Seasons, Nobu and Montage Hotels & Resorts (opening in May) all offering oceanfront residences with extensive amenities, these buyers can choose from a variety of modern villas in leading-edge, master-planned developments. Homes in these projects begin well above $2 million and go up from there, based on size and proximity to the water. 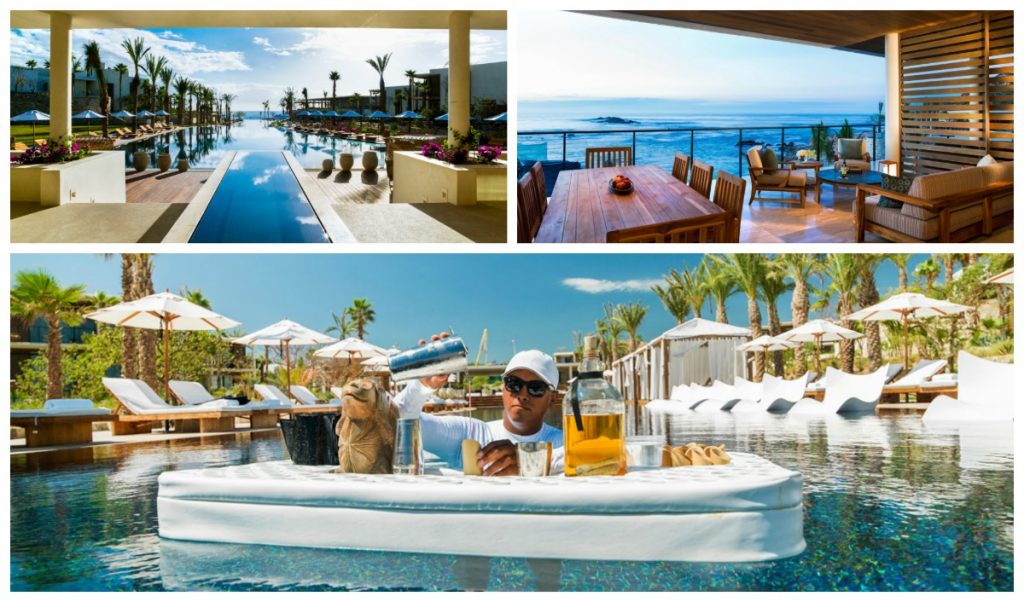 Chileno Bay Resort & Residences, an Auberge Resorts Collection property, is the epitome of the new normal for luxury lifestyle in Los Cabos. One of the many new developments in the Los Cabos Corridor, the 20-mile stretch of picturesque coastline between Cabo San Lucas and San Jose del Cabo, Chileno Bay Resort & Residences is set upon 22 sprawling acres above a protected cove at one of Cabo’s only swimmable beaches. The development includes a boutique resort with 29 guest rooms and 33 (phase one) residences. There was such demand for Chileno Bay’s beach villas that 90 percent of them were sold or under contract before opening day. According to Mark Cooley, a partner at SV Capital, the resort’s developer, sales exceeded expectations and accelerated plans for phase two; the additional 28 villas in phase two are also selling quickly.

Susan Jeffas, head of real estate sales at Chileno Bay Residences, says the resort “nailed it.” And she should know, as she has seen the metamorphosis of Cabo over the last 18 years. An expat from New Jersey, Jeffas made the full-time move to Cabo with her husband after only one visit in 1999. She says there’s been a steady community of expats that continue to come year after year and, although a lot is changing in Cabo, some things remain the same. “The allure of a life less complicated is still the reason expats continue to relocate here,” Jeffas explains. Add to that an iconic beachfront experience, spacious private villas, exceptional service and access to world-class resort amenities and it’s easy to see why Los Cabos (and Chileno Bay, specifically) is booming.

According to Jeffas, there is a genuineness to Chileno Bay that begins with the staff. Hotel Manager Marco Bustamante cherry-picked the exceptional team that leads with a welcoming spirit. When you first arrive at Chileno Bay Resort, no matter your current disposition, slowly, the best kind of transformation begins to happen. Guests are greeted with welcome beverages and chilled herbal towels.

It’s easy to quickly become immersed in the relaxed atmosphere and natural beauty of the resort’s grounds. The modern architecture emphasizes indoor-outdoor living with floor-to-ceiling windows while the prevailing color palette of cerulean blues and golden sand hues complements the natural environment and oceanfront setting. The villa’s inviting floor plans range from 2,750 to 3,100 square feet, comprising both indoor living space and expansive outdoor terraces. Many of the units also offer outdoor showers and soaking tubs.

The preeminent feature of the resort is the 450-foot-long, three-tiered swimming pool that extends from the heart of the property and flows like a river toward the Sea of Cortez. If lounging in and around the pool is not idyllic enough, a floating margarita bar appears at 5 p.m. each day. It doesn’t get much better than sipping a margarita in the pool while watching the frigate birds soar in the sky over the beach as the sun starts to go down.

The culinary program, a hallmark of the Auberge Resorts Collection, is front and center and features seasonal and locally sourced ingredients. The signature restaurant, Comal, is relaxed chic and helmed by locally loved and internationally known chef Yvan Mucharraz, alum of The French Laundry and L’Atelier de Joël Robuchon restaurants in Yountville, California, and Paris. A three-tiered, open-air setting with magnificent ocean views is the backdrop for memorable meals including dishes such as crispy octopus, duck carnitas and braised short rib with cacao broth. A raw bar located at the center of the restaurant offers an impressive array of locally caught seafood as well as raw oysters and clams. Down by the beach, the casual and lively tacos and tequila bar, TnT, serves up a selection of Mexican street-style tacos, artisanal tequilas, local beers and freshly crafted cocktails.

The property also features the H2O Cave (a watersports center offering, among other things, glass-bottom kayaks and snorkeling gear), two movie theaters, a state-of-the-art fitness center and the world-class Auberge Spa at Chileno Bay. Residents and their guests also have exclusive access to the members-only golf course at Chileno Bay Golf & Beach Club, designed by Tom Fazio with a full 18 holes and ocean views. 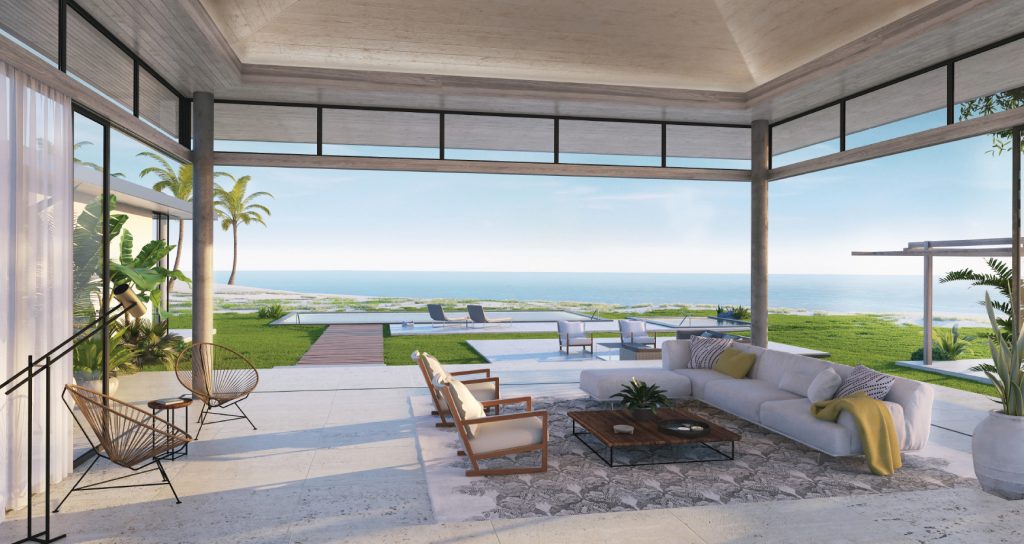 Four Seasons Resort and Residences Los Cabos at Costa Palmas (shown in this rendering) opens in 2019.

Whether it’s for vacationing, investing or retiring, for those in the market, the list of ultraluxury residential offerings keeps growing. The renowned luxury brand Montage Hotels & Resorts will open Montage Los Cabos in May of this year. Set within the celebrated master planned community of Twin Dolphin on the sweeping shores of Santa Maria Bay, this beachfront sanctuary will feature 52 two- and three-bedroom residences priced from $2.7 million as well as a 122-room resort.

Located within the master-planned resort of Puerto Los Cabos in San Jose del Cabo (less than 20 minutes from the airport), West Enclave, a Ritz-Carlton Reserve Residence, is a collection of 27 modern villas nestled just steps away from a secluded 2-mile stretch of beach. The residences, which feature a combined 10,000 square feet of indoor/outdoor living space, are carefully situated around the highly anticipated Zadun, a Ritz-Carlton Reserve, a hotel scheduled to open in late 2018. The resort community includes a world-class marina and two golf courses designed by Greg Norman and Jack Nicklaus. Villas are priced from $4.9 million. 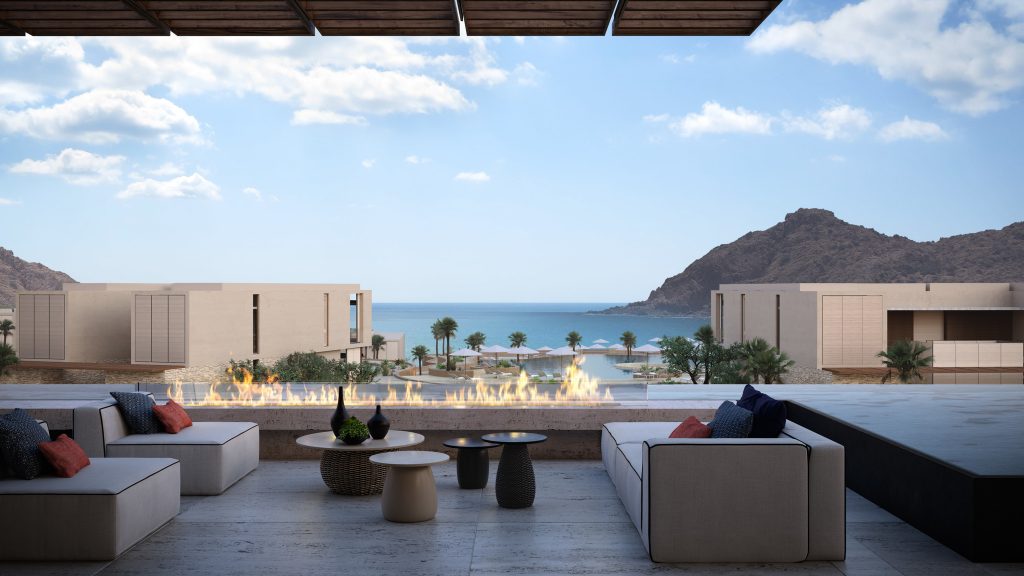 Montage Los Cabos (shown in this rendering) opens in May.

Over on the less-traveled and relatively undeveloped East Cape, Four Seasons is getting in on the action with its first venture in the Los Cabos area. Opening in early 2019, Four Seasons Resort and Residences Los Cabos at Costa Palmas will be a 145-room resort with approximately 60 residences. Costa Palmas is set on 1,000 beachfront acres and includes a 250-slip marina designed for super yachts, along with a yacht club and an 18-hole golf course. 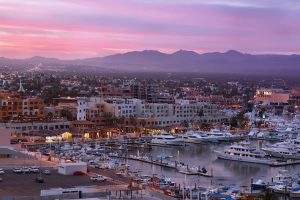 The marina in expanding Los Cabos.

Cabo BC (Before Costco)

Many of the expats that have lived in Cabo for a number of years often refer to a time they call Cabo BC (before Costco). “The BC ‘before Costco’ comment gets laughs when those of us who’ve been here a long time share stories of Cabo’s growth in recent years,” Susan Jeffas says. ‘Before Costco’ refers to old Cabo as a small fishing village. “Those were the days when staying connected to friends and family in the States required a trip to the internet cafe because most homes didn’t even have telephones, grocery shopping was an adventure with the need to stop at multiple stores to procure the items necessary to make a meal, and a time when most people here knew each other.”

The arrival of Costco ushered in the new Cabo. As the expat population increased rapidly, so did development and the need for box stores like Costco, The Home Depot and Walmart. “Suddenly, with access to these modern conveniences, the feel of old Cabo changed a bit,” Jeffas says. However, “the magic of Cabo has never changed.”