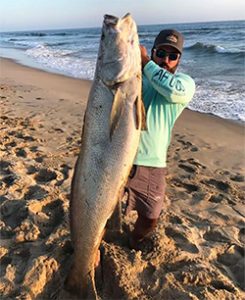 It was 2 kilos over the 67-year-old world record.

A fisherman from La Paz, Baja California Sur, landed a giant white sea bass on April 30 which could beat a long-held world record for the species.

“This catch has the potential to break the current All-Tackle record of 37.98 kilograms that has been held for over 67 years,” the International Game Fishing Association (IGFA) posted to its Facebook page yesterday.

The white sea bass is a species of croaker normally found between Magdalena Bay, Baja California, and Juneau, Alaska.

Ricardo Reyes Martínez, 36, caught the monster fish, which he says weighed in at 39.9 kilos, southwest of La Paz on the Pacific side of the Baja California peninsula while surfcasting for snapper.

Should the catch be certified, it could set a double world record for the All-Tackle and 9-kilo-line class catch.

The IGFA has strict rules on how a world record is measured, requiring the catch to be weighed on an IGFA or government-certified scale, but Reyes is hopeful that his application, which needs to include samples of his fishing line, photos and witness testimony, will be approved.

“I did not expect to win a world record. I did not even plan to send the information, but when I saw that the fish was a good size, I decided to send in the official documentation,” he said.

This article first appeared in the Mexico News Daily